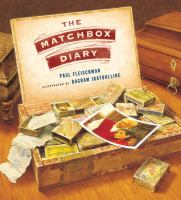 Follow a girl's perusal of her great-grandfather's collection of matchboxes and small curios that document his poignant immigration journey from Italy to a new country.

Gr 1-4-An Italian-American immigrant shares his childhood memories with his great-granddaughter. The twist of this tale is that his memories have been kept in a "diary" of saved objects that commemorate the important events of his life. As a poor child who could neither read nor write, this now-elderly gentleman found a unique way to preserve his memories by saving the objects in matchboxes. Among the many items were a box of sunflower seed shells that counted the days from Naples to New York, a fish bone to remember the long days the entire family had to work in the canneries, and a ticket stub from his first baseball game. The journey unfolds prompted by the child's curious questions. Her inquiries provoke the descriptive vignettes of an earlier time and yet frame the story through the eyes of a youngster of today. Ibatoulline's sepia-toned illustrations beautifully express this immigrant's tale from Italy to Ellis Island and the start of a new life. They also provide a wonderful contrast to the warm-colored illustrations that depict a loving, appreciative relationship between an elderly man and a young child. This lovingly crafted picture book tells an amazing story that is uniquely American. Through unsentimental, yet warm and touching dialogue, Fleischman successfully shares a powerful journey that captures the hardships, self-reliance, strength, and simple joys that characterized early immigrants. It provides an inspirational introduction to the immigration story that captures the humanity of the journey.-Carole Phillips, Greenacres Elementary School, Scarsdale, NY (c) Copyright 2013. Library Journals LLC, a wholly owned subsidiary of Media Source, Inc. No redistribution permitted.

Paul Fleischman was born in Monterey, California on September 5, 1952. His father is fellow children's author, Sid Fleischman. He attended the University of California at Berkeley for two years, from 1970 to 1972. He dropped out to go on a cross-country train/bicycle trip and along the way took care of a 200-year-old house in New Hampshire. He eventually earned a Bachelor of Arts Degree from the University of New Mexico in 1977.

He founded the grammar watchdog groups ColonWatch and The Society for the Prevention of Cruelty to English.