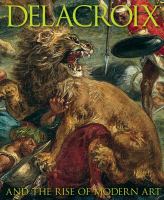 Delacroix and the rise of modern art / Patrick Noon and Christopher Riopelle.

"This exhibition is co-organized by the Minneapolis Institute of Art and The National Gallery, London. [The exhibition will be held at] Minneapolis Institute of Art, 18 October 2015-10 January 2016, [entitled: 'Delacroix's Influence: The Rise of Modern Art from Cézanne to van Gogh'; and at] The National Gallery, London, 17 February-22 May 2016"--Title page verso.

"Eugène Delacroix (1789-1863), a dominant figure in 19th-century French art, was a complex and contradictory painter whose legacy is deep and enduring. This important, beautifully illustrated book considers Delacroix in his own time, alongside contemporaries such as Courbet, Fromentin, and the poet Charles Baudelaire, as well as his significant influence on successive generations of artists. Delacroix's paintings and his posthumously published Journals laid crucial groundwork for immediate successors including Cézanne, Degas, Manet, Monet, and Renoir. Later admirers including Seurat, Gauguin, Moreau, Redon, Van Gogh, and Matisse renewed the obsession with his work. Through essays and catalogue entries, the authors demonstrate how Delacroix became mentor and archetype to younger generations who sought direction for their own creative experiments, and found inspiration in Delacroix's brilliant use of color, audacious technique, and rebellious nature."--Distributor's description.

As the supporting book to an exhibition at the Minneapolis Institute of Arts and London's National Gallery of Art, this title examines the relationship of the 19th-century French romantic artist Eugène Delacroix (1798-1863) and the influence he had on the artists that followed, from Henri Fantin-Latour to the impressionists, neo-impressionists, post-impressionists, and on into the early 20th century with Henri Matisse. Museum curators Noon (Minneapolis Inst. of Arts) and Riopelle (National Gallery, London) discuss Delacroix's virtuosic use of color and brushstrokes as well as his imagination and personal vision in the interpretation of his subject matter. They argue that the artist was an inspiration to later avant-garde innovators such as Pierre-Auguste Renoir, Vincent Van Gogh, Paul Gauguin, Paul Cézanne, Odilon Redon, and Matisse. In terms of technique, these artists shared Delacroix's original and forceful use of brushstrokes and color. Cézanne, -Redon, Renoir, and Matisse also employed allegorical, literary, and orientalist themes in a similar way to Delacroix. VERDICT This well-written and -researched book is recommended for readers interested in 19th-century French art.-Sandra Rothenberg, -Framingham State Univ. Lib., MA © Copyright 2016. Library Journals LLC, a wholly owned subsidiary of Media Source, Inc. No redistribution permitted.

Patrick Noon is Elizabeth MacMillan Chair of Paintings at the Minneapolis Institute of Arts. Christopher Riopelle is curator of post-1800 paintings at the National Gallery, London