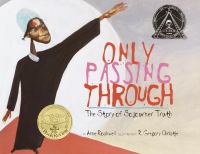 Only passing through : the story of Sojourner Truth / by Anne Rockwell ; illustrated by Gregory Christie.

Biography of Sojourner Truth, who was born into slavery, freed in 1827, and became famous for her courage, quick wit, and ready challenge as she campaigned for abolition and women's rights in New York and the Midwestern States.

Gr 3-5-Rockwell concentrates on the part of Sojourner Truth's life that sometimes gets passed over in the rush to the "Ain't I a Woman" speech. In her long picture-book text, the author deftly weaves facts into a narrative that is straightforward and direct, if sometimes abrupt. She includes no references or bibliography, though she does mention Truth's autobiography as the "most helpful" of the sources she used. A detailed chronology of Truth's entire life helps to give context to Rockwell's specific story, but readers will have to do some exploring on their own to get the bigger picture. Christie's paintings, in a distinctive primitive style that overemphasizes people's heads, help to portray Truth's striking personality. Her chiseled, shining face dominates every page, and when she speaks, her entire figure controls and moves the composition. Unfortunately, the distorted look of the illustrations may not appeal to many children. The book is formally laid out, with a single-page painting framed in white facing text on every spread. Though this suits the formal sense in the composed illustrations and text, it adds to the distance some readers will feel when they pick up this book. If not immediately engaging to its readers or completely illuminating of its subject, this is a well-done introductory biography with a unique perspective that may move youngsters to look for more.-Nina Lindsay, Oakland Public Library, CA (c) Copyright 2010. Library Journals LLC, a wholly owned subsidiary of Media Source, Inc. No redistribution permitted.

Anne Rockwell was born in Memphis, Tennessee on February 8, 1934. She moved to New York City at the age of 18 and found a job doing typing work for a textbook publisher. She studied at Pratt Graphic Arts Center and at the Sculpture Center.

She became an author and illustrator. Her first children's book, Paul and Arthur Search for the Egg, was published in 1964. Her other books included Boats, Fire Engines, Things That Go, Our Earth, and Only Passing Through: The Story of Sojourner Truth. She collaborated on several books with her husband Harlow Rockwell including Sally's Caterpillar and The Toolbox. After her husband's death, she collaborated with her daughter Lizzy Rockwell. Their books included Career Day and Zoo Day. She died of natural causes on April 10, 2018 at the age of 85.