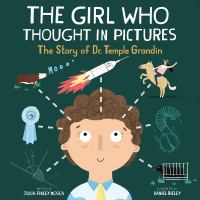 The girl who thought in pictures : the story of Dr. Temple Grandin / written by Julia Finley Mosca ; illustrated by Daniel Rieley.

Describes the life and accomplishments of the animal scientist and designer of cruelty-free livestock facilities, from her early life and autism diagnosis through her journey to become a livestock expert.

K-Gr 2-Diagnosed at an early age with autism, Temple Grandin (b. 1947) grew up at a time when there was generally little care or regard for those like her. However, Grandin's mother was able to secure the therapies and education her daughter needed to thrive. ("She was 'Different, Not less,' they all finally agreed.") Grandin would eventually design animal husbandry techniques to more humanely treat livestock in the meat industry. Rhyming verse and appealing cartoon illustrations capture Grandin's spirit while providing an exciting, informative look at her remarkable life. Invaluable back matter contains a letter from Temple, fun facts, a time line accompanied by family photographs, and an insightful biography. Even the bookmaking pays tribute to its subject, with endpapers covered in adorable cartoon cattle. Reminiscent of Meghan McCarthy's quirky nonfiction, this is the first volume in a promising new series introducing readers to remarkable women in the sciences. VERDICT A fine addition to nonfiction -biography -collections.-Rebecca Gueorguiev, New York Public Library © Copyright 2017. Library Journals LLC, a wholly owned subsidiary of Media Source, Inc. No redistribution permitted.

JULIA FINLEY MOSCA is a copywriter and former journalist who spent more than a decade in Hollywood crafting messages for money. After working with such recognizable brands as Entertainment Tonight, Yahoo!, American Greetings, and JibJab , she landed her most rewarding job yet--mom to one ferociously curious and spunky little girl. The Amazing Scientists series marks Mosca's debut into the magical world of children's books.

DANIEL RIELEY is a British freelance illustrator based in Lisbon. After studying at The Arts Institute Bournemouth, taking an epic backpacking adventure in Australia, and working 3 years in London, he decided to take off to sunny Portugal. For the last 2 years, Daniel has been working on several illustration projects in advertising, print, card design, and children's picture books. When Daniel is not drawing you can probably find him trying to catch waves, taking photos with old cameras, or playing his newly discovered sport Padel.