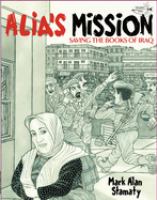 "Originally published in hardcover in the United States by Alfred A. Knopf, an imprint of Random House Children's Books, a division of Random House, Inc., New York, in 2004"--Title page verso.

Presents the story of Alia, a librarian who lives and works in Basra, and her desperate attempt to save the books in the Basra Central Library at the start of the Iraqi War in 2003.