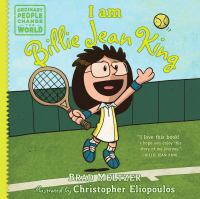 | JUVENILE NONFICTION / Sports & Recreation / Racket Sports | Women -- Biography | United StatesGenre/Form: Biographies. | Biography. | Juvenile works. | Biographies.DDC classification: 796.3420 | B LOC classification: GV994.K56 | M45 2019Summary: Presents an illustrated biography of the tennis star, from her childhood and early competitive career to her role as activist for equality in sports.
Tags from this library: No tags from this library for this title. Log in to add tags.

Presents an illustrated biography of the tennis star, from her childhood and early competitive career to her role as activist for equality in sports.

Brad Meltzer was born on April 1, 1970 and grew up in Brooklyn, NY. He graduated from the University of Michigan and Columbia Law School. His first published title was called The Tenth Justice. His other works include Dead Even, The First Counsel, The Millionaires, The Book of Fate, The Zero Game, The Inner Circle and The Fifth Assassin. He is the Eisner Award-winning author of the critically acclaimed comic book, Justice League of America. He also wrote the non-fiction books, Heroes for My Son and Heroes for My Daughter. He has written speeches for former President Clinton's National Service Program and played himself as an extra in Woody Allen's film, Celebrity. In 2013, his title History Decoded: The 10 Greatest Conspiracies of All Time.

In 2014 his titles, I Am Abraham Lincoln, I Am Amelia Earhart and I am Rosa Parks made The New York Times Best Seller List.

In 2016, Meltzer's title's The House of Secrets, I Am George Washington, and I Am Jane Goodall made the New York Times Bestseller list.