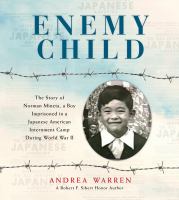 Before the storm -- Coming to America -- War at home -- The world at war -- Lowering the net -- Losing everything -- Santa Anita -- Into the wilderness -- Heart mountain -- New routines -- Making the best of it -- Baseball! -- Meeting the enemy -- The miracle of Heart Mountain -- Leaving Heart Mountain -- Victory over Japan -- Going home -- School, army, politics -- A distinguished career.

"A biography of Norman Mineta, from his internment as a child in Heart Mountain Internment Camp during World War II, through his political career including serving in congress for ten terms during which time he was instrumental in getting the Civil Liberties Act of 1988 passed which provided reparations and an apology to those who were interned"--

Gr 5-8-When Norman Mineta was nine years old, he was living with his family in San Jose, CA. Like many boys his age, Norm was interested in baseball, comics, and joking with his friends. But when Japan attacked Pearl Harbor in 1941, bringing America into World War II, Norm's life changed forever because he and his -family were Japanese Americans. At first there were curfews and FBI searches of Japanese American homes. Then Norm learns that a neighbor was handcuffed and taken away. By connecting Mineta's story to the larger events of World War II and its impact on Japanese Americans, the author helps readers learn about a frightening historical injustice. They and thousands of other Japanese American families were forced from their homes, sent to desolate internment camps, and imprisoned against their will. Using more than 100 photographs and many quotes from Mineta, the author chronicles his family's experiences living in a camp in Wyoming, where he and his family lived in a single room shack, denied their privacy and freedom while being watched by an armed guard. Despite these conditions, we also learn that the family's loyalty to America was unwavering. The author continues the story beyond internment to tell about Mineta's career as a politician, serving 10 terms in the House of Representatives and as a cabinet member for two presidents. It is an inspiring story of character and endurance despite hardships. An important, well-told story. VERDICT An excellent choice for social studies classes, literature circles, and libraries. Extensive back matter enriches understanding of this historical narrative.-Myra Zarnowski, City University of New York © Copyright 2019. Library Journals LLC, a wholly owned subsidiary of Media Source, Inc. No redistribution permitted.

Andrea Warren is a writer and journalist who has written many award-winning nonfiction books for children, including Orphan Train Rider- One Boy's True Story, winner of the Boston Globe-Horn Book Award; Surviving Hitler- A Boy in the Nazi Death Camps, a Robert F. Sibert Honor Book; and Escape from Saigon- How a Vietnam War Orphan Became an American Boy. Ms. Warren lives in Kansas.