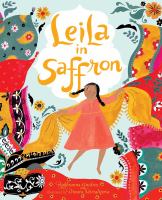 Shy and unsure of herself, Leila discovers all the things that make her special with the loving help of her Naani.

PreS-Gr 2--In her sophomore offering, Guidroz (Mina and the Monsoon), introduces Leila, a Pakistani-American girl visiting Naani (her maternal grandmother) for dinner. The book is an explosion of color and an exploration of family, togetherness, and belonging. Upon entering the house and looking in a mirror, Leila initially expresses low self-esteem. But as she moves through the evening, she describes her family and their traditions, and this reflects back her own true beauty in the end. Mirtalipova renders the entire book, especially Naani's house, in great detail, from the intricate flower patterns on the endpapers, rugs, and pillows, to the ornate metalwork on the staircase, and the delicate ornaments and books from Pakistan that Leila admires. The colors are lush pops of orange, pink, teal, and gold, which Guidroz describes in Naani's voice as the colors of lentils, pomegranates, cucumber skins, and saffron. A scarf in this last color inspires Leila to see herself as she is in the mirror, "A beautiful girl dressed in a sweet saffron scarf." Leila describes her evening using all of her senses, as she smells the ghee, and hears Naani's bangles. The cumulative experience of the book is being immersed in this warm environment. A slight stumble is the brief introduction of a gardening neighbor named "Miguel," whose appearance disrupts, rather than adds to, the narrative. Seven words, which appear throughout the book, are defined in a glossary, though their origin languages (Arabic and Hindi) are not named. VERDICT Leila's journey is a beautiful one to behold, and children will want to take it with her as they discover the power of love and family traditions.--Clara Hendricks, Cambridge Public Library, MA

Rukhsanna Guidroz was born in Manchester, England. With a Persian-Indian father and a Chinese mother, Rukhsanna was always drawn to traveling to faraway places. After studying French at King's College, London, and political science at the Sorbonne, Paris, she left for the steamy shores of Hong Kong. There, she worked as a reporter for the Hong Kong Standard daily newspaper, and later as a producer of the current affairs show Hong Kong Today for RTHK's Radio 3. She also wrote features for in-flight magazines for China Airlines, Qantas, and Emirates. Inspired by all her life experiences from Europe to Asia, and now to Hawaii, Rukhsanna has many written adventures to share.

Dinara Mirtalipova is a self-taught illustrator and designer. Born and raised in Tashkent, Uzbekistan, she studied computer science at the Tashkent State University of Economics, however her true passion was always pattern and illustration. Raised in Soviet Uzbek culture, Dinara's artwork is greatly influenced by Uzbek and Russian folklore. Currently, Dinara works from her home studio in Sagamore Hills, Ohio. She uses a wide range of materials and tools, such as linoleum block, gouache, acrylic, and more.