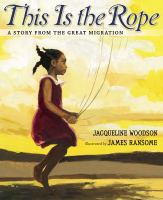 This is the rope : a story from the Great Migration / Jacqueline Woodson ; illustrated by James Ransome.

A rope passed down through the generations frames an African American family's story as they journey north during the time of the Great Migration.

Gr K-2-Something as simple as a discarded rope has tied a family story together through several generations. In the middle of the 20th century, an African American family moves from South Carolina to Brooklyn, NY, making the great migration north as many other families bravely did at the time. This tale follows a family through several generations, always coming back to the rope and its impact on the family as it's used to jump rope and tie suitcases to their car for the drive north. Channie Waites narrates with soothing and rhythmic tones. The story ends on a heartwarming, positive note with a family reunion which lends itself to further classroom discussion about the importance of family. VERDICT Woodson's story of family is a wonderful addition to any collection and will prove helpful for discussing civil rights with students.-Jessica -Gilcreast, Bedford High School, NH (c) Copyright 2015. Library Journals LLC, a wholly owned subsidiary of Media Source, Inc. No redistribution permitted.

Jacqueline Woodson was born in Columbus, Ohio on February 12, 1963. She received a B.A. in English from Adelphi University in 1985. Before becoming a full-time writer, she worked as a drama therapist for runaways and homeless children in New York City. Her books include The House You Pass on the Way, I Hadn't Meant to Tell You This, Lena, and The Day You Begin. She won the Coretta Scott King Award in 2001 for Miracle's Boys. After Tupac and D Foster, Feathers, and Show Way won Newbery Honors. Brown Girl Dreaming won the E. B. White Read-Aloud Award in 2015. Her other awards include the Margaret A. Edwards Award for lifetime achievement in writing for young adults, the Los Angeles Times Book Prize, and the 2018 Astrid Lindgren Memorial Award. She was also selected as the Young People's Poet Laureate in 2015 by the Poetry Foundation.