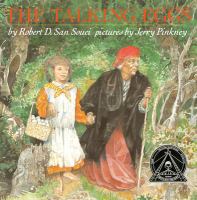 The talking eggs : a folktale from the American South / retold by Robert D. San Souci ; pictures by Jerry Pinkney.

"The full-color artwork was prepared using pencil, colored pencils, and watercolor. It was then color-separated and reproduced as red, blue, yellow, and black halftones"--T.p. verso.

Includes a note about the origin of The talking eggs folktale (p. [3]).

A Southern folktale in which kind Blanche, following the instructions of an old witch, gains riches, while her greedy sister makes fun of the old woman and is duly rewarded.

K-Gr 3-- This adaptation of a Creole folktale contains familiar European fairy tale elements, but certainly stands on its own and is a unique contribution to the American folktale repertoire. In imagistic language spiced with Southern folk flavor, San Souci tells of a cruel mother and her two daughters, Blanche and Rose. Rose is just like her mother, while Blanche is good and kind, and consequently abused. One day Blanche meets an old woman and treats her with a ``spirit of do-right.'' Soon they meet again, when Blanche runs away from mistreatment and the old woman takes her back to her house. And what marvels Blanche finds there--a two-headed cow, multi-colored chickens, abundant food from nothing, a hostess who takes off her head to comb her hair (the illustrations spare readers most of this last detail), and a glorious scene of rabbits engaged in country dancing. For being obedient, Blanche is rewarded with magic talking eggs that turn into everything she's ever wanted. As expected, her greedy family wants to get in on the action, but Rose, of course, fails to follow the old woman's instructions, and gets nothing but a plague of snakes, toads, frogs, and the like. This lesson about virtue rewarded and greed punished is illustrated with Pinkney's lush, detailed watercolor and pencil art, which literally interprets the story and provides abundant detail. The characters are black, the setting rural, and the themes universal. --Leda Schubert, Vermont Department of Education, Montpelier (c) Copyright 2010. Library Journals LLC, a wholly owned subsidiary of Media Source, Inc. No redistribution permitted.

Robert D. San Souci was born on October 10, 1946 in San Francisco, California. He attended college at St. Mary's College in Moraga. After holding jobs in book stores and in publishing, he became a full-time author in 1974.

He was best known for his adaptations of folklore for children. During his lifetime, he wrote more than 100 books for young readers including Song of Sedna, Kate Shelley: Bound for Legend, The Talking Eggs, Two Bear Cubs, Cendrillon: A Caribbean Cinderella, Brave Margaret: An Irish Tale, Robin Hood and the Golden Arrow, and Cinderella Skeleton. He wrote 12 books which were illustrated by his younger brother Daniel San Souci including The Legend of Scarface, Sister Tricksters: Rollicking Tales of Clever Females, and As Luck Would Have It: From The Brothers Grimm. He also wrote nonfiction works for children, several novels for adults, and the film story for Disney's Mulan.

The Legend of Scarface won the Notable Children's Trade Book in the Social Studies, National Council for the Social Studies, and was a Horn Book honor list citation. Sukey and the Mermaid won the American Library Association's Notable Book citation in 1992 and Cut from the Same Cloth won an Aesop Award from the Children's Folklore Section of the American Folklore Society. He died on December 19, 2014 at the age of 68.