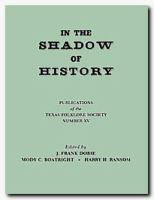 Reprint of the 1966 ed. published by Folklore Associates, Hatboro, Pa., which was issued as Publication no. 15 of the Texas Folklore Society.

Folk-lore and tradition in a growing society / by Radoslav A. Tsanoff -- Rose and his story of the Alamo: The line that Travis drew / by J. Frank Dobie ; An escape from the Alamo / by W.P. Zuber ; A vindication of Rose and his story / by R.B. Blake -- Inventing stories about the Alamo / W.P. Zuber to Charlie Jeffries -- How Jim Bowie died / by Edward G. Rohrbough -- Anecdotes as sidelights to Texas history / by Marcelle Lively Hamer -- There's a geography of humorous anecdotes / by Charles F. Arrowood -- Folk characters of the sheep industry / by Winnifred Kupper -- The ghost sheep dog / by Merrill Bishop -- The Pastor and the serpent / by Dan Storm -- The Mexican folk version of King Midas / by W.A. Whatley -- Tortilla making / by Ruth Dodson -- Navajo sketches / by Yanh-Na-Bah -- The roadrunner in fact and folk-lore / by J. Frank Dobie.

J. Frank Dobie (1888-1964) was an American folklorist, writer, and newspaper columnist best known for many books depicting the richness and traditions of life in rural Texas. In 1922, he became secretary of the Texas Folklore Society and held the post for 21 years.

Harry H. Ransom (1908-1976), University of Texas English Professor, was appointed associate editor of TFS in 1938. He later became president of UT and then chancellor.