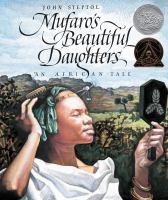 Includes a note about the origin of the story and characters (introductory page).

Mufaro's two beautiful daughters, one bad-tempered, one kind and sweet, go before the king, who is choosing a wife.

PreS-Gr 3 An African villager named Mufaro had two daughters whom everyone agreed were beautiful. However, their dispositions were not alike: Manyara had a bad temper and was selfish (although not in front of Mufaro); Nyasha was always kind and considerate both to people and to animals. When Mufaro receives word that the Great King is inviting all of the most worthy and beautiful women to appear before him so that he might choose a wife, Mufaro decides that both of his daughters should go. Manyara, believing herself more worthy and beautiful than her sister, sets out alone so that she can be presented to the king before her sister. What happens to each girl along the way depends on her response to the strange people whom she encounters. This folktale shows the traditional qualities, characterizations, and predictability. It is distinguished, however, by its colorful ink and watercolor illustrations of the costumes, artifacts, flora, and fauna of the Zimbabwe region. The expressive drawings of people and events enhance the story and serve to strengthen readers' familiarity with traditional African culture. A magnificently illustrated book, filled with rich textures and vibrant color, and a story that will satisfy young romantics as well as those with a strong sense of justice. Helen E. Williams, University of Maryland, College Park (c) Copyright 2010. Library Journals LLC, a wholly owned subsidiary of Media Source, Inc. No redistribution permitted.

John Steptoe was born in Brooklyn, New York on September 14, 1950. He attended the High School of Art and Design in Manhattan. He was an author and illustrator of children's books. His first book, Stevie, was published in 1969. During his lifetime, he illustrated 15 more books, 9 of which he also wrote. The Story of Jumping Mouse and Mufaro's Beautiful Daughters were named Caldecott honor books. Mother Crocodile and Mufaro's Beautiful Daughters received the Coretta Scott King Award for Illustration. He died of AIDS on August 28, 1989 at the age of 38.