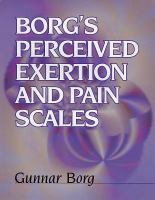 <p> Gunnar Borg, PhD, introduced the field of perceived exertion during the latter part of the 1950s. Since then, he has won international renown for his work in developing methods for measuring perceived exertion and pain. His method for measuring perceived exertion is the main method used in the field, and his new scale, the Borg CR10 scale, is used for measuring both perceived exertion and pain, and other subjective magnitudes.</p> <p>He is the author of Physical Performance and Perceived Exertion, the book that introduced the field of perception. He also is coauthor of "The relation between neural and perceptual intensity: A comparative study on the neural and psychophysical response to taste stimuli," published in the Journal of Physiology in 1967. The article is fundamental to the science of psychophysiology. It marked the first time that perceptual magnitudes could be correlated directly to afferent neurophysiological responses of human beings. Another fundamental contribution is Borg's Range Model, which provides basic principles for determinations of "absolute" levels of intensity and how inter-individual and intermodal comparisons can be done.</p> <p>Borg has organized and served as chair for numerous international symposia in the field of perception. He lectures worldwide, particularly in the United States, Canada, and Japan. He was nominated for the Australian Prize by the American College of Sports Medicine for research in the field of perception with applications for the benefit of mankind.</p> <p>Currently professor emeritus of perception and psychophysics at Stockholm University, Borg's educational background encompasses the fields of psychology, philosophy, education, physiology, and sports. Borg was an associate professor at the Medical School in Umea, Sweden, from 1962 to 1968, during which time he also served as director of the laboratory for clinical psychology at the Umea Hospital. He was professor of perception and psychophysics at Stockholm University from 1987 to 1994.</p> <p>Borg was elected a member of the Royal Swedish Academy for Engineering Sciences in 1970. The following year, the King of Sweden awarded Borg the title of Professor. Borg is a member of the International Association of Applied Psychology, the International Association for the Study of Pain, and the International Society for Psychophysics.</p> <p>Borg and his wife Yvonne live in Rimbo, Sweden. His leisure activities include tennis, golf, skiing, and "walk-and-talk."<br> <br></p>