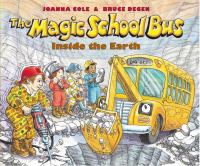 The magic school bus : inside the Earth / by Joanna Cole ; illustrated by Bruce Degen.

On a special field trip in the magic school bus, Ms Frizzle's class learn at first hand about different kinds of rocks and the formation of the earth.

Gr 2-5 Cole and Degen have struck at the core once again to produce an exciting, attractive, and informative science book for young readers. Children who entered Ms. Frizzle's classroom in The Magic School Bus at the Waterworks (Scholastic, 1986), are in for another exhuberant, intriguing field trip. This time, it's to the center of the earth. Surprises abound through each strata down to the very inner core where it is hot, hot, hot. The class collects rock samples before the bus is expelled from the earth's core in a volcanic eruption. Illustrations are in watercolor cartoon format and attendant ``balloons'' contain pertinent information or students' humorous asides. There are also pages from students' reports on rocks. A tongue-in-cheek section at the end discusses the real and fantasy aspects of the book. Containing uncluttered text and illustrations, it is an anticipatory page-turner full of exciting adventure from school yard to volcano and back. Mary Lou Budd, Milford South Elementary School, Ohio (c) Copyright 2010. Library Journals LLC, a wholly owned subsidiary of Media Source, Inc. No redistribution permitted.

Joanna Cole was born in Newark, New Jersey on August 11, 1944. She attended the University of Massachusetts, Indiana University, and City College of New York where she earned a degree in Psychology.

Ms. Cole has worked as an elementary school teacher, a librarian, and a children's book editor. As a child, she loved science and explaining things and this is why she started writing children's books. She writes fiction and non-fiction titles. Her most well-known series are the Magic School Bus and the "Body."

Cole's books have received a number of honors. A Horse's Body and A Snake's Body were both named Outstanding Science Trade Books for children by the joint committee of the National Science Teachers Association and the Children's Book Council. In 1982, A Snake's Body was named a Children's Choice Book by the joint committee of the International Reading Association and the Children's Book Council. Both A Cat's Body and A Bird's Body were Junior Literary Guild selections. In 1991, she was awarded the Washington Post/Children's Book Guild Nonfiction award.