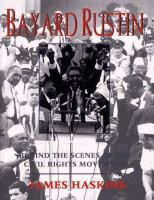 Bayard Rustin : behind the scenes of the civil rights movement / James Haskins.

A biography of Bayard Rustin, a skillful organizer behind the scenes of the American civil rights movement whose ideas stongly influenced Martin Luther King, Jr.

Gr 8 UpHaskins skillfully blends details of his subject's life and work with descriptions of the civil rights struggle. Rustin's own words complement the portrait of this man who devoted his life to advancing the cause of equal rights for blacks in the U.S. and supporting victims of oppression all over the world. Recalling his early life and the influence of his Quaker grandmother, the book goes on to discuss Rustin's close relationships with A. Philip Randolph and Martin Luther King, Jr., as well as his belief in nonviolent means to affect change. The 1963 March on Washington, which he organized, was not supported by everyone with whom he worked, and he was often seen as more of a liability than as an asset to the movement because of his open homosexuality. Rustin consistently triumphed over his objectors and finally a book is available to attest to his contributions. An insert of fine-quality, black-and-white photos enhances the presentation. A well-written, well-documented biography and an enlightening look at the civil rights movement.Carol Fazioli, Cardinal Hayes Library, Manhattan College, NY (c) Copyright 2010. Library Journals LLC, a wholly owned subsidiary of Media Source, Inc. No redistribution permitted.

Author Jim Haskins was born in Demopolis, Alabama on September 19, 1941. He received a B.A. from Georgetown University in 1960, a B.S. from Alabama State University in 1962, and a M.A. from the University of New Mexico in 1963. After graduation, he became a special education teacher in a public school in Harlem. His first book, Diary of a Harlem School Teacher, was the result of his experience there. He taught at numerous colleges and universities before becoming an English professor at the University of Florida, Gainesville in 1977.

He wrote more than 100 books during his lifetime, ranging from counting books for children to biographies on Rosa Parks, Hank Aaron and Spike Lee. He won numerous awards for his work including the 1976 Coretta Scott King Award for The Story of Stevie Wonder, the 1984 Coretta Scott King Award for Lena Horne, the 1979 ASCAP Deems Taylor Award for Scott Joplin: The Man Who Made Ragtime; and the 1994 Washington Post Children's Book Guide Award. He also won the Carter G. Woodson Award for young adult non-fiction for Black Music in America; The March on Washington; and Carter G. Woodson: The Man Who Put "Black" in American History in 1989, 1994, and 2001, respectively. He died from complications of emphysema on July 6, 2005 at the age of 63.