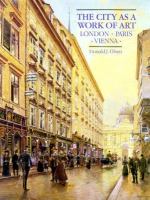 The city as a work of art : London, Paris, Vienna / Donald J. Olsen.

A sweeping comparative analysis of three great European metropolises in the 19th century, equally concerned with ordinary social life and monumental civic life. Olsen, author of two earlier books on the growth of London, mines with a cultivated air an English vein of writing about architecture, rendering his subject matter as a document of history and society and scattering drawing room references to T.S. Eliot and Edith Wharton. He interprets the city not as a department store of bourgeois consumption, the ``product'' of industrialization, but rather as a vessel of civilization itself, a theater of historicist consciousness. This is a major statement on the 19th-century city, destined to be a landmark in the fields of urban and planning history. Peter S. Kaufman, Suffolk Community Coll. Lib., Selden, N.Y. (c) Copyright 2010. Library Journals LLC, a wholly owned subsidiary of Media Source, Inc. No redistribution permitted.

During the course of the century preceding 1914, the centers of London, Paris, and Vienna were given the form we experience today. Olsen (history, Vassar) takes a well-informed, sympathetic, and fresh view of the much maligned 19th-century architecture and of the society it reflects. He compares public and private life in the three cities and relates it to their very different buildings and streets. With facts, references, and quotes from contemporaneous sources and with strong opinions of his own, Olsen explores the 19th-century historical approach to design and pleads for a renewal of a similar attitude in our times. His view of the complex problems of our cities may be oversimplified but is a small part of a well-illustrated (except for maps) book by a scholar who, obviously, loves cities and can bring them to life for students of art, architecture, and planning. Good bibliography, notes, and index. Recommended for college, university, and public libraries.-P.J. Mitarachi, Boston Architectural Center