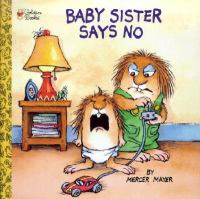 A boy has a hard time playing with his friend because his baby sister is hanging around yelling, "No," about everything they try to do.

Mercer Mayer was born December 30, 1943 in Little Rock Arkansas. While attending school at the Honolulu Museum of Art, Mayer decided to enter the field of children's book illustration. He created a portfolio of sketches and peddled them wherever he could. He moved to New York City in 1964, pursuing further instruction at the Art Students League of New York, where he met an artist named Marianna who became his first wife. He soon created a new portfolio and with these new sketches persuaded editors at Dial Press and Harper & Row to give him some illustration work. Mayer published his first book, A Boy, a Dog, and a Frog, at Dial Press in 1967. It was notable for being a completely wordless picture book one that tells its story entirely with pictures. Mayer was one of the first illustrators to be credited for using this format. Five more books in this series were to follow. Mayer joined Golden Publishing, creators of Little Golden Books, in 1976. Through them he has sold his "Little Critter" and "Little Monster" series, which are popular with beginning readers. His title Just Me and My Dad made The New York Times Best Seller List for 2012. In 2015, his title Little Critter: Just a Little Love, also made the list. His holiday book, Merry Christmas Mom and Dad, is also a bestseller.