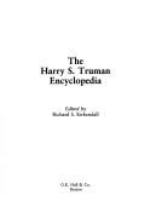 The second in G.K. Hall's series of presidential encyclopedias, and successor to Franklin D. Roosevelt, His Life and Times: An Encyclopedic View ( LJ 5/1/85), this contain some 320 alphabetical articles. One third of them are topical (``Containment,'' ``Public Opinion Polling''); one third biographical (``Douglas MacArthur,'' ``Alben W. Barkley''); and the remainder are split between geographical topics (``Latin America,'' ``Turkey'') and biographical articles focusing on Truman himself (``Reading,'' ``Ancestry''). Articles vary in length from several paragraphs to several pages, all with a brief bibliography. The entries are expertly written by scholars who give differing historiographical interpretations each their due. A useful item in both public and academic libraries.-- Robert F. Nardini, N. Chichester, N.H. (c) Copyright 2010. Library Journals LLC, a wholly owned subsidiary of Media Source, Inc. No redistribution permitted.

Noted Truman scholar Richard S. Kirkendall (University of Washington) has assembled an impressive collection of approximately 300 essays (which average 1,500 words) written by prominent historians, political scientists, and researchers of the Truman era. The essays are not dominated by one point of view but present a full spectrum of the variety of scholarly interpretations concerning aspects of Truman's personal life and of the subjects, forces, and events that played a crucial role during his lifetime. Topics range from Missouri to Richard M. Nixon, from scandals to Zionism, and include the Korean War. Entries, arranged alphabetically, are followed by extensive bibliographical essays. Most entries are accompanied by a photograph or some type of illustration. There are name and subject cross-references after many essays plus an excellent index. Working within the "G.K. Hall Presidential Encyclopedia Series" format, Kirkendall models his book after Franklin D. Roosevelt: His Life and Times, An Encyclopedic View, ed. by O.L. Graham and M.R. Wander (CH, Nov'86), but he also intends the volume to serve as an update to his The Truman Period as a Research Field (2nd ed., 1974; 1st ed., CH, Jul'68). This meticulously edited encyclopedia will be a standard reference and research source for years. -C. C. Hay III, Eastern Kentucky University