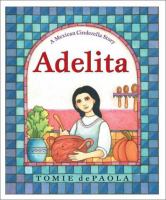 After the death of her mother and father, Adelita is badly mistreated by her stepmother and stepsisters until she finds her own true love at a grand fiesta.

K-Gr 3-In this folktale variant, lovely Adelita gains a family when her father remarries. Following the traditional story line, Dona Micaela and her daughters, Valentina and Dulce, are utterly impossible, but all is well as long as Adelita's father is alive. However, when he dies, she is relegated to helping in the kitchen. Eventually, Dona Micaela evicts old Esperanza, and her stepdaughter is left to do all the work. On the night of the fiesta at the Gordillos' hacienda, it is Esperanza who takes the fairy godmother role, sends Adelita to the party, and sees to it that young Javier is smitten. True to form, he locates the young woman when she flees, and they marry. The prose is straightforward and crisp, though the habit of including a Spanish phrase that is translated immediately afterward (e.g., "Soy yo-only me-" or "-mi peque-ita-my little one-") interrupts the narrative flow. However, this is a minor quibble given the beauty of dePaola's signature artwork. Making perfect use of clear, warm hues, the full-color acrylic illustrations are a feast for the eye. Depth and brilliance in composition combine with economy of line and form to create a true tour de force. Use this with either Robert D. San Souci's Little Gold Star (HarperCollins, 2000) or Joe Hayes's Little Gold Star/Estrellita de oro (Cinco Puntos, 2000) for different looks at "Cinderella" through Mexican eyes.-Ann Welton, Grant Elementary School, Tacoma, WA (c) Copyright 2010. Library Journals LLC, a wholly owned subsidiary of Media Source, Inc. No redistribution permitted.

Tomie dePaola was born in Meriden, Connecticut on September 15, 1934. He received a B.F.A. from Pratt Institute in 1956, a M.F.A. from California College of Arts and Crafts in 1969, and a doctoral equivalency from Lone Mountain College in 1970. <p> He has written and/or illustrated more than 270 books including 26 Fairmount Avenue, Strega Nona, Meet the Barkers, Nana Upstairs and Nana Downstairs, and Oliver Button Is a Sissy. He has received numerous awards for his work including the Caldecott Honor Award, the Newbery Honor Award and the New Hampshire Governor's Arts Award of Living Treasure. His murals and paintings can be seen in many churches and monasteries throughout New England. He has designed greeting cards, magazine and record album covers, and theater sets. His work is shown in galleries and museums. <p> Tomie dePaola died on March 30, 2020 because of complications he had from surgery after a fall. <p> (Bowker Author Biography)