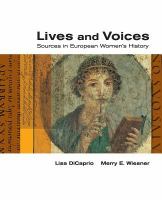 [This] reader ... anthologizes primary source materials about women's lives and presents an overview of the variety of women's experiences dating from ancient Mesopotamia to contemporary Bosnia. This primary source reader includes classics in women's history such as works by Plato, Christine de Pizan, Mary Wollstonecraft, and Virginia Woolf, as well as sources that have never before been published in English. The collection ... ranges widely in terms of topic, social class, and geography; both male- and female-authored texts are included to present a range of normative, descriptive, and reflective materials. Topics discussed include family, work, religion, culture, immigration, global economy, and politics.--Back cover.