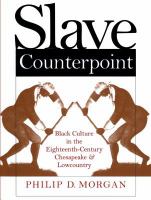 "On the eve of the American Revolution, nearly three-quarters of all African Americans in mainland British America lived in two regions: the Chesapeake, centered in Virginia, and the Lowcountry, with its hub in South Carolina. Here, Philip Morgan compares and contrasts African American life in these two regional Black cultures, exploring the differences as well as the similarities. The result is a detailed and comprehensive view of slave life in the colonial American South."

"Morgan explores the role of land and labor in shaping culture, the everyday contacts of masters and slaves that defined the possibilities and limitations of cultural exchange, and finally the interior life of Blacks--their social relations, their family and kin ties, and the major symbolic dimensions of life: language, play, and religion. He provides a balanced appreciation for the oppressiveness of bondage and for the ability of slaves to shape their lives, showing that, whatever the constraints, slaves contributed to the making of their history. Victims of a brutal, dehumanizing system, slaves nonetheless strove to create order to their lives, to preserve their humanity, to achieve dignity, and to sustain dreams of a better future." -- The publisher.

During the 18th century, blacks in the Chesapeake and Low Country South Carolina developed distinctive regional cultures that shaped a national African American subculture. Morgan convincingly sustains this thesis in a work of unprecedented scope that is indispensable for students and scholars of slavery in early America. The study's major sections deal with black work and material life, economic and social interaction with whites, and interior development of African American family, language, and religion. Morgan stresses the influences of regionally differing ecologies, staple crops, sources of slave supply, and planters' lifestyles to show the complex processes through which two black cultures emerged. Drawing on a wide array of primary sources and a truly impressive survey of the literature, he enriches understanding of the origins of chattel slavery, the growth of racism, the nature of black resistance, and the role of African cultural elements in slaves' lives. This book can be mined for its insightful treatments of everything from slaves' independent economic activity to the dynamics of interracial sex to the cultural significance of black play and song. A major reinterpretation of early American history that should attract a wide readership. All levels. T. S. Whitman Mount St. Mary's College and Seminary