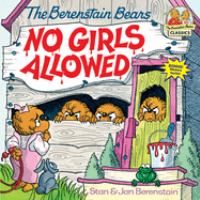 Annoyed that Sister Bear always beats them at baseball and other "boy" type activities, her brother and the other male cubs try to exclude her from their new club.

Stan Berenstain was born in 1923 in Philadelphia, the same year and place as his future wife, Jan. They met as students at the Philadelphia College of Art. World War II delayed their career plans: Stan joined the army as a medical assistant while Jan supported the war effort by working in an airplane factory. They married in 1946 and together began drawing cartoons for the McCall's/Good Housekeeping It's All in the Family series. They worked on this feature from 1956 through 1990.

The Big Honey Hunt, published in 1962, was their first book for children. This book about a family of bears, written for Dr. Seuss's Beginner Books series, was so popular that Dr. Seuss himself, Theodore Geisel, encouraged them to write more stories. Geisel's advice launched the Berenstains on life-career writing and illustrating the very successful Berenstain Bears books.

Stan Berenstain passed away on November 26th, 2005, after a lengthy battle with lymphoma. He was 82.