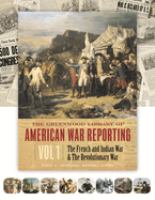 This set offers a broad and deep overview of how the American press has reckoned with battle. Copeland (Sch. of Communication, Elon Univ.; Debating the Issues in Colonial Newspapers), with other named contributors, chronologically presents reports from over 2000 newspapers and magazines, as well as radio and television, on major conflicts from the French and Indian War to the current War on Terror. Each volume has a consistent and accessible format: after a detailed table of contents, the war in question is first covered by a multiple-page time line, followed by an overall introduction. Numbered topical segments presenting actual examples of war reporting come next. The War of 1812, for example, is subdivided into 26 units, starting with "The Impressment Issue," proceeding with segments that offer background, and concluding with segments covering actual battles, the conclusion, and treaties. Each segment has its own small introduction, and each primary source is headed by an inset paragraph giving context. New items have source citations but lack reference to the original page numbers. Rounding out the text are contemporary illustrations and reproductions of actual news items, as well as extensive selected bibliographies. Bottom Line An efficient and extensive source of primary research material displaying the opinions, style of presentation, and attitudes of contemporary journalists, this work is suitable for both academic and large public libraries.-Daniel K. Blewett, Coll. of Dupage Lib., Glen Ellyn, IL (c) Copyright 2010. Library Journals LLC, a wholly owned subsidiary of Media Source, Inc. No redistribution permitted.

[Visited Oct'05] This work uses primary sources, contemporary first-person accounts, and over 2,500 annotated news reports with radio and television transcripts to detail events of America's military conflicts from Colonial times to the Iraqi conflict and the war on terror. WW II is divided into European and Pacific theaters. Journalism has been the eyes and ears of this country--the first glance at history in the making. Context-setting overviews introduce every volume, topical chapter, and unabridged primary source. There are time lines, a guide to documents, thematic indexes, pictures, and suggestions for further reading for each conflict. All articles are annotated. A table of contents allows the reader to zero in on needed documents. As a media historian who writes extensively on the Colonial press and journalism history, Copeland is an eminently qualified editor. He is the author of many books and chapters in this area, editor of the online journal Media History Monographs, editor of Greenwood's Debating Historical Issues in the Media of the Time series, and chief editor of the Thomson Gale 19th-Century Newspaper Digitization Project. All authors have a journalism or communication background. This eight-volume set is limited to journalistic accounts, and would complement a traditional historical approach such as that of Encyclopedia of War and American Society, ed. by Peter Karsten (2005). The last two volumes, The Vietnam War & Post-Vietnam Conflicts and The Iraq Wars and the War on Terror, should be of particular interest. A valuable addition to any reference collection with its wealth of primary sources, this work should save many trips to the microfilm room. ^BSumming Up: Recommended. Academic libraries serving lower-level undergraduates through faculty/researchers; public libraries. D. M. Buckley University of Dayton

David A. Copeland is A. J. Fletcher Professor in the School of Communication at Elon University. He is the editor of the Greenwood Press Debating Historical Issues in the Media of the Time series. He is also the author of Debating the Issues in Colonial Newspapers (Greenwood, 2000), The Antebellum Era (Greenwood, 2003), and with Shannon Martin, The Function of Newspapers in Society (Praeger, 2003).