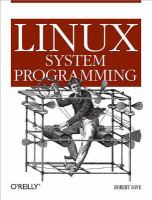 Provides information on writing system software for Linux, covering such topics as reading from and writing to files, memory management, and signals, and process management.

A programmer needs to know not only the language being programmed, but the interfaces to the operating system being used. For Linux, all that information freely exists, but finding the piece of the puzzle needed can take a lot of time unless one has Love's book--it is a fine resource. It also clearly explains why one method is used over another and gives easily understood examples. It is better than the typical course resource at explaining clearly and succinctly. Topics include file I/O, process management, memory management, signals, error message definitions, POSIX constant definitions, and time structure. An appendix covers the GCC extensions to the C language. Since the C language is derived from UNIX, most C compilers for different systems try to emulate running on a UNIX system. For that reason, this book has a fair amount of applications to other systems. This reviewer just finished teaching a course in C in which the students used two other operating systems besides Linux. Had he known of this book, he would have required his students to purchase it--it would have answered many questions! Summing Up: Highly recommended. Lower-division undergraduates through professionals; two-year technical program students. R. P. Sarna Maine Maritime Academy

Robert Love has been a Linux user and hacker since the early days. Heis active in, and passionate about, both the Linux kernel and GNOMEdesktop communities. His recent contributions to the Linux kernelinclude work on the kernel event layer and inotify. GNOME-relatedcontributions include Beagle, GNOME Volume Manager, NetworkManager,and Project Utopia. Currently Robert works in the Open Source ProgramOffice at Google.As an author, Robert is responsible for Linux Kernel Development(SAMS), now in its second edition, and Linux System Programming(O'Reilly). He is also a coauthor of the fifth edition of O'Reilly'sLinux in a Nutshell. He's a Contributing Editor for Linux Journal, haswritten numerous articles, and has been invited to speak around theworld on Linux.Robert graduated from the University of Florida with a B.A. inMathematics and a B.S. in Computer Science. Hailing from SouthFlorida, he currently calls Boston home.