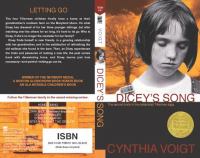 Now that the four abandoned Tillerman children are settled in with their grandmother, Dicey finds that their new beginnings require love, trust, humor, and courage.

Cynthia Voigt was born on February 25, 1942 in Boston, Massachusetts. She received a bachelor's degree from Smith College, did graduate work at St. Michael's College, and later received a teacher's certification from Christian Brothers College. After college, she worked for an advertising agency. Before becoming a full-time author, she was a secretary and a high school English teacher. Her first book, Homecoming, was published in 1981.

Her children's books address such issues at child abuse and racism, topics that are not often talked about in books designed for children. She is the author of numerous books including the Bad Girls series, the Tillerman Cycle series, and the Kingdom series. She won the Notable Children's Trade Book in the field of social studies for Homecoming, the Newbery Medal, ALA in 1983 for Dicey's Song, and the Edgar Allan Poe Award in 1984 for The Callender Papers. In 1995, she received the MAE Award.