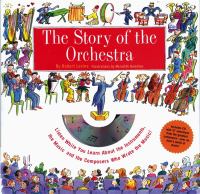 The story of the orchestra : listen while you learn about the instruments, the music, and the composers who wrote the music / Robert Levine ; illustrated by Meredith Hamilton.

Describes the orchestra and includes information on composers, instruments, and the conductor.

The composers -- The orchestra instruments -- The conductor.

Gr 4-8-Orchestra Bob guides readers through a delightful musical journey. The book is divided into two major parts: composers from Vivaldi to Bernstein and their associated musical periods, and the instruments of the orchestra. There are interesting and sometimes humorous bits of information about the men, their music, and corresponding historical events. The last two pages introduce the conductor. Quotations, boxed definitions, and the captions that accompany the colorful photos and spot cartoon drawings enhance the instructive text. In some places, however, the drawings are in stark contrast to the photos and take away from the overall appearance of a page. An accompanying CD provides musical selections for readers to listen to at specific places in the text. These selections are short enough to keep young listeners' attention. Although some well-known figures, such as Handel, Schubert, and Strauss, are missing, this is a fun way to travel through the world of music.-Susan Shaver, Hemingford Public Schools, NE (c) Copyright 2010. Library Journals LLC, a wholly owned subsidiary of Media Source, Inc. No redistribution permitted.

Meredith Hamilton graduated from Brown University and has an MFA from the School of Visual Arts. Formerly an art director at Newsweek and Time , she illustrated the previous six books in the Child's Introduction series, among other books, and her work can be found in magazines and animations as well. She lives in Brooklyn, New York, with her husband and three children.

Author Robert Levine is an internationally known music and travel writer whose work has appeared in dozens of publications. He was the co-editor of Records' Classical Pulse! Magazine , helped launch and was the Senior Editor-in-chief of Andante.com, a world wide web site devoted to every aspect of classical music and musicians. He attends his operas and symphonies in New York.