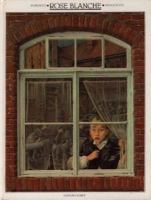 During World War II, a young German girl's curiosity leads her to discover something far more terrible than the day-to-day hardships and privations that she and her neighbors have experienced.

Gr 5 Up During World War II, a young German schoolgirl, Rose Blanche, follows the soldiers when they arrest a boy and discovers a concentration camp in the woods. Thereafter , she takes food to the prisoners until the town is liberated. Ironically, when she travels to the camp on that day she is shot by the soldiers. The oppression of Fascism is shown through the powerful and realistic paintings. In Innocenti's large, meticulously detailed paintings, Rose Blanche is the only brightly colored individual, and her small figure is set against the drab colors of overwhelming buildings and masses of soldiers and townspeople. No skyline is shown until a radiant spring bursts forth at the site of her death after the liberation. Although the story is simply told, it will require interpretation as details such as the concentration camp are not named nor explained, and the death of Rose Blanche is implied but not stated. This is a difficult book to classify, as the text is easy enough for a young child to read alone, and it has the appearance of a picture bookbut the content of the text and illustrations is full of emotional impact and subtlety. Takashima's A Child in Prison Camp (Tundra, 1971) and Maruki's Hiroshima No Pika (Lothrop, 1982) present the horrors of war, but from the perspective of a child who survives, whereas in Gallaz' book, the child does not survive and is not the recounter of the events. The Children We Remember (Kar-Ben Copies, 1983) by Abells is an easier book for children to understand. Rose Blanche tells of an individual's courage in the face of injustice, but this theme is more fully developed in Orlev's novel The Island on Bird Street (Houghton, 1984). Lorraine Douglas, Winnipeg Public Library, Manitoba, Canada (c) Copyright 2010. Library Journals LLC, a wholly owned subsidiary of Media Source, Inc. No redistribution permitted.