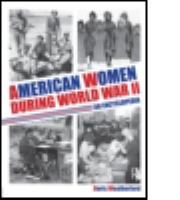 "American Women during World War II documents the lives and stories of women who contributed directly to the war effort via official and semi-official military organizations, as well as the millions of women who worked in civilian defense industries, ranging from aircraft maintenance to munitions manufacturing and much more. It also illuminates how the war changed the lives of women in more traditional home front roles. All women had to cope with rationing of basic household goods, and most women volunteered in war-related programs. Other entries discuss institutional change, as the war affected every aspect of life, including as schools, hospitals, and even religion." "American Women during World War II provides a handy one-volume collection of information and images suitable for any public or professional library."--BOOK JACKET.

WW II changed the lives of American women forever. Women replaced men in both the workforce and the military, and coped with rationing, dislocation, and absence of loved ones. Weatherford (Florida Southern College) provides good coverage of all of these topics in this volume, addressing social, political, personal, health, family, sexual, racial, ethnic, and other issues--among them postwar changes and their impact. The book encompasses groups and organizations, individual biographies, and topical issues. The author frequently compares the condition of women in Allied and Axis countries with that of American women. Alphabetical entries average two pages each and often include excerpts from personal accounts. Cross-references and bibliographies of wartime and modern writings are featured, and poster and photo illustrations appear throughout. Summing Up: Recommended. Lower-level undergraduates and above; general readers. E. F. Konerding Wesleyan University

<p>Doris Weatherford has published on American women for over twenty years, including the four-volume History of Women in the United States: A State-by-State Reference. She's associated with the Center for Florida History at Florida Southern College and the National Women's History Museum in Washington D.C.</p>