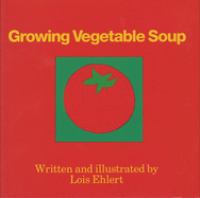 A father and child grow vegetables and then make them into a soup.

PreS-Gr 1 This is the boldest, brassiest garden book to hit the market, and what a delight. Intensely colored graphics capture the complete growing process from seed to cooking pot, with the focus on the plants. The unseen narrator describes the process of growing vegetable soup, from preparing the tools and digging holes for the seeds to weeding plants; picking vegetables; washing, chopping, and cooking themand finally enjoying the homemade soup while planning to grow more next year. It's a fresh presentation of the gardening cycle with a joyful conclusion, and the added attraction of an easy and tasty recipe for vegetable soup on the flyleaf. A book to help nourish healthy readers. Barbara Peklo Serling, Oneida City Schools, N.Y. (c) Copyright 2010. Library Journals LLC, a wholly owned subsidiary of Media Source, Inc. No redistribution permitted.

Lois Ehlert was born November 9, 1934, in Beaver Dam, Wisconsin. She is a graduate of the University of Wisconsin, Milwaukee, and the Layton School of Art. She has also worked as an art teacher, freelance illustrator, and designer. She has created 38 books for young reader and is known for her colorful collage artwork. Her work as an author and an illustrator has appeared in countless publications and has received numerous awards and honors.