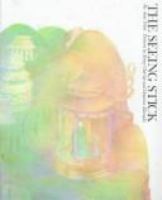 The seeing stick / by Jane Yolen ; pictures by Remy Charlip and Demetra Maraslis.

Relates how an old man teaches the emperor's blind daughter to see.

Jane Yolen was born February 11, 1939 in New York City. She received a bachelor's degree from Smith College in 1960 and a master's degree in education from the University of Massachusetts in 1976. After college, she became an editor in New York City and wrote during her lunch break. She sold her first children's book, Pirates in Petticoats, at the age of 22. Since then, she has written over 300 books for children, young adults, and adults.

Her other works include the Emperor and the Kite, Owl Moon, How Do Dinosaurs Say Goodnight? and The Devil's Arithmetic. She has won numerous awards including the Kerlan Award, the Regina Medal, the Keene State Children's Literature Award, the Caldecott Medal, two Nebula Awards, two Christopher Medals, the World Fantasy Award, three Mythopoeic Fantasy Awards, the Golden Kite Award, the Jewish Book Award, the World Fantasy Association's Lifetime Achievement Award, and the Association of Jewish Libraries Award.