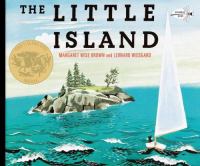 The little island, by Golden MacDonald; with illustrations by Leonard Weisgard.

Depicts the changes that occur on a small island as the seasons come and go, as day changes to night, and as a storm approaches.

Margaret Wise Brown was born on May 10, 1910 in Greenpoint, Brooklyn, New York, to Robert Brown, a Vice President at American Manufacturing Company and Maud Brown, a housewife. She attended school in Lausanne, Switzerland for three years, before attending Dana Hall in Wellesley, Massachusetts for two years. In 1928, she began taking classes at Hollis College in Virginia.

In 1935, Brown began working at the Bank Street Cooperative School for student teachers. Two years later, her writing career took off with the publication of "When the Wind Blows." Over the course of fourteen years, Brown wrote over one hundred picture books for children. Some of her best known titles include Goodnight Moon, Big Red Barn and Runaway Bunny.

Margaret Wise Brown died on November 13, 1952 of an embolism following an operation in Nice, France.