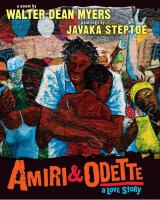 Presents a modern, urban retelling in verse of the ballet in which brave Amiri falls in love with beautiful Odette and fights evil Big Red for her on the streets of the Swan Lake Projects.

Gr 7 Up-Born from Myers's musings on the underlying violence in Swan Lake, this story is a riff on that ballet with tones of West Side Story, Shakespeare, and hip-hop. In the projects, Amiri's mom is going to throw him a party in the hope that he'll find the right girl and settle down. But that night on the courts, Amiri meets Odette-and though she is promised to Big Red, a crack dealer, they proclaim their love. "And thus the pact is set, the bargain sealed,/Both agony and love revealed./But are solutions so easily discovered?/Happy endings so readily recovered/Among the castaways and rejects/Of the teeming Swan Lake Projects?/Is happy chance alone gladly greeted/And Big Red so easily defeated?" There follows the evil twin, the betrayal, the forgiveness, the fight-and a happier ending than in most versions of the ballet. Myers's verse is almost overwrought-as it should be to suit the story, and the intensity of teenage love. The melodrama combines with an energy and beat that-heightened by dynamic text design-makes this ideal for performance. Steptoe's collage-on-cinderblock illustrations have a roughness, darkness, and density that suit the tone. This selection will broaden any teen collection.-Nina Lindsay, Oakland Public Library, CA (c) Copyright 2010. Library Journals LLC, a wholly owned subsidiary of Media Source, Inc. No redistribution permitted.

Walter Dean Myers was born on August 12, 1937 in Martinsberg, West Virginia. When he was three years old, his mother died and his father sent him to live with Herbert and Florence Dean in Harlem, New York. He began writing stories while in his teens. He dropped out of high school and enlisted in the Army at the age of 17. After completing his army service, he took a construction job and continued to write. <p> He entered and won a 1969 contest sponsored by the Council on Interracial Books for Children, which led to the publication of his first book, Where Does the Day Go? During his lifetime, he wrote more than 100 fiction and nonfiction books for children and young adults. His works include Fallen Angels, Bad Boy, Darius and Twig, Scorpions, Lockdown, Sunrise Over Fallujah, Invasion, Juba!, and On a Clear Day. He also collaborated with his son Christopher, an artist, on a number of picture books for young readers including We Are America: A Tribute from the Heart and Harlem, which received a Caldecott Honor Award, as well as the teen novel Autobiography of My Dead Brother. <p> He was the winner of the first-ever Michael L. Printz Award for Monster, the first recipient of the Coretta Scott King-Virginia Hamilton Award for Lifetime Achievement, and a recipient of the Margaret A. Edwards Award for lifetime achievement in writing for young adults. He also won the Coretta Scott King Award for African American authors five times. He died on July 1, 2014, following a brief illness, at the age of 76. <p> (Bowker Author Biography)