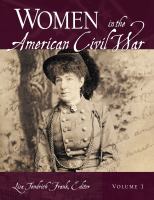 Description based on print version record.

Covers the role of women in the Civil War, from battlefield to home front.

Edited by independent scholar Frank and including the work of more than 100 other scholars, this two-volume set seeks--as its introduction states--to illuminate "how women survived, contributed to, undermined and lived through the Civil War." Volume 1 begins with some dozen in-depth contextual essays, each focused on a broad theme (e.g., African American women, female spies, wartime employment). Although these useful entries are included in the index, their placement upfront ensures that they will likely be overlooked by newer scholars simply searching alphabetically. The set then presents, in alphabetical order, 300-plus shorter entries falling into two categories: biographical (e.g., abolitionists Julie Ward Howe and Jane Grey Swisshelm) and thematic (e.g., imprisonment, treasury girls, urban women). The entries are signed and include both See also references and lists of references for further reading. The volumes conclude with a cumulative index that, while solid, would have been of greater benefit to students and researchers if it had also listed these women by role or occupation (e.g., warrior, nurse, spy). Because such organization is lacking, users must know a woman's name in order to locate this type of identifying information. Rounding out the book are a bibliography of primary and secondary sources, a chronology of Civil War events, and original documents, including letters and diaries. BOTTOM LINE Despite the drawbacks cited, this is an excellent addition for placement on the shelf alongside Judith E. Harper's Women During the Civil War: An Encyclopedia (Routledge, 2007). Recommended for high school, public, and academic libraries. [e-ISBN 978-1-85109-605-3; call ABC-CLIO for e-pricing. Also available electronically through Ebook Library, MyiLibrary, ebrary, and NetLibrary.]--Lura Sanborn, St. Paul's Sch. Lib., NH (c) Copyright 2010. Library Journals LLC, a wholly owned subsidiary of Media Source, Inc. No redistribution permitted. All rights reserved.

Gr 9 Up-These volumes begin with 14 essays ("Abolitionism and Northern Reformers," "Female Spies") that offer broad overviews of the subject; many of them often repeat basic facts. The more than 300 entries that follow present detailed information on well-known and not-so-well-known women (combatants and others), military events, education, courtship and marriage, urban and rural lifestyles, and the practice of keeping diaries and journals. Each signed entry is cross-referenced and has further-reading suggestions. The 24 primary sources include book excerpts (such as from Harriet Beecher Stowe's Uncle Tom's Cabin), newspaper articles, diary excerpts, and military orders (for example, for the evacuation of Atlanta in 1864). The core component of each essay and entry is an explanation of how women experienced or reacted to the war, which varied depending upon race, economic status, location, or politics, and how, by war's end and the years following, they were afforded new opportunities in the American democracy. The vast offerings from women's journals and other writings, which make the work relevant for literature as well as history students, are an outstanding feature. Readers will be entranced by the vivid descriptions offered by women from all walks of life. Average-quality black-and-white photographs and illustrations are scattered throughout. A chronology integrates women's topics with traditionally discussed Civil War events, and there is an extensive bibliography. A first purchase.-Patricia Ann Owens, Wabash Valley College, Mt. Carmel, IL (c) Copyright 2010. Library Journals LLC, a wholly owned subsidiary of Media Source, Inc. No redistribution permitted.

Frank's two-volume work emphasizes the role of women in the American Civil War. With its wealth of information and resources, this set will be a welcome addition to any reference collection. Fourteen contextual essays discuss the social and political issues of the era and the varied backgrounds of women affected by the war. Over 300 entries include biographical sketches, key military and political events, and the contributions of women during the war. Written by scholars in history and related fields, the entries list names, dates, and essential facts about each subject while focusing on women's contributions to the war effort. Cross-references and a list of books and articles for further reading follow each entry. Another useful tool is the chronology of events from 1831 to 1894, which offers an overview of women's history. The second volume includes 24 primary source documents consisting largely of journal entries. Entries are well written and accompanied by illustrations and pictures when possible. The set includes an extensive bibliography. Summing Up: Recommended. Academic and public library collections; lower- and upper-level undergraduates, general readers. T. L. Storey Lamar University--Beaumont

Lisa Tendrich Frank , PhD, is an independent scholar in Coral Springs, FL. Her published works include numerous articles on Southern women during the American Civil War.