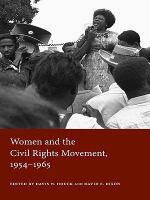 Historians have long agreed that women--black and white--were instrumental in shaping the civil rights movement. Until recently, though, such claims have not been supported by easily accessed texts of speeches and addresses. With this first-of-its-kind anthology, Davis W. Houck and David E. Dixon present thirty-nine full-text addresses by women who spoke out while the struggle was at its most intense. Beginning with the Brown decision in 1954 and extending through the Voting Rights Act of 1965, the editors chronicle the unique and important rhetorical contributions made by such well-known activists as Ella Baker, Fannie Lou Hamer, Daisy Bates, Lillian Smith, Mamie Till-Mobley, Lorraine Hansberry, Dorothy Height, and Rosa Parks. They also include speeches from lesser-known but influential leaders such as Della Sullins, Marie Foster, Johnnie Carr, Jane Schutt, and Barbara Posey. Nearly every speech was discovered in local, regional, or national archives, and many are published or transcribed from audiotape here for the first time. Houck and Dixon introduce each speaker and occasion with a headnote highlighting key biographical and background details. The editors also provide a general introduction that places these public addresses in context. Women and the Civil Rights Movement, 1954-1965 gives voice to stalwarts whose passionate orations were vital to every phase of a movement that changed America.