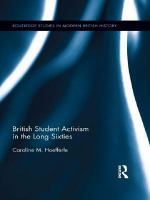 Front Cover; British Student Activism in the Long Sixties; Copyright Page; Contents; Acknowledgments; Introduction; 1 Beginnings: Student Activism in the Fifties and Early Sixties; 2 "The Troubles" of Universities in the Mid-sixties; 3 1968, That Magical Year; 4 The Transformation of the Student Movement; 5 The Seventies and the Rise of the Unions; Epilogue and Conclusions; Notes; Bibliography; Index

Based on empirical evidence derived from university and national archives across the country and interviews with participants, British Student Activism in the Long Sixties reconstructs the world of university students in the 1960s and 1970s. Student accounts are placed within the context of a wide variety of primary and secondary sources from across Britain and the world, making this project the first book-length history of the British student movement to employ literary and theoretical frameworks which differentiate it from most other histories of student activism to date.<

Caroline Hoefferle is an associate professor of history and chair of the Department of History at Wingate University in North Carolina. She has published a number of chapters and articles on the subjects of historiography and student and peace activism in Britain and the United States, including her most recent book, The Essential Historiography Reader (2010).