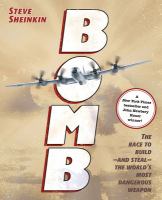 Bomb : the race to build and steal the world's most dangerous weapon / Steve Sheinkin.

Recounts the scientific discoveries that enabled atom splitting, the military intelligence operations that occurred in rival countries, and the work of brilliant scientists hidden at Los Alamos.

Gr 5 Up-"Harry Gold was right: This is a big story." So begins this depiction of the "creation-and theft-of the deadliest weapon ever invented." As he did in The Notorious Benedict Arnold (Roaring Brook, 2010), Sheinkin has again brought his superior talent for storytelling to bear in what is truly a gripping account of discovery, espionage, and revolutionary changes in both physics and the modern world. This fascinating tale, packed with a wide cast of characters, focuses mainly on three individuals: spy for the Soviets Harry Gold, leader of the Manhattan Project J. Robert Oppenheimer, and Knut Haukelid, who sabotaged German bomb efforts while working for the Norwegian resistance. Sheinkin skillfully combines lucid, conversational snapshots of the science behind the atomic bomb with a fast-paced narrative of the remarkable people who made it possible and attempted to steal it. Handsomely designed and loaded with archival photos and primary-source documents, the accessible volume lays out how the bomb was envisioned and brought to fruition. While the historical information and hard facts presented here will likely be new to the intended audience, they in no way overwhelm readers or detract from the thoroughly researched, well-documented account. It reads like an international spy thriller, and that's the beauty of it.-Brian Odom, Pelham Public Library, AL (c) Copyright 2012. Library Journals LLC, a wholly owned subsidiary of Media Source, Inc. No redistribution permitted.