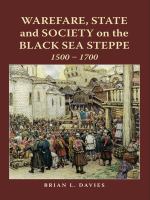 This crucial period in Russia's history has, up until now, been neglected by historians, but here Brian L. Davies' study provides an essential insight into the emergence of Russia as a great power.For nearly three centuries, Russia vied with the Crimean Khanate, the Polish-Lithuanian Commonwealth and the Ottoman Empire for mastery of the Ukraine and the fertile steppes above the Black Sea, a region of great strategic and economic importance - arguably the pivot of Eurasia at the time.The long campaign took a great toll upon Russia's population, economy and institutions, and repeatedly frustrat

Packed with detailed information and two good but complicated maps, this is not a book for beginners. But those with a good mental image of the region and its history or a good historical atlas in hand will find it highly informative. Davies (Univ. of Texas at San Antonio) follows closely the interactions of three regional superpowers--the Polish-Lithuanian Commonwealth, Moscow, and the Ottoman Empire--and two independent-minded client peoples, the Tatars and Cossacks, neither of which could be kept in hand by the area's putative rulers. The author opens with an overview of warfare and slave-raiding (Tatars carried away a million people between 1500 and 1644), then discusses Moscow's borderland strategy. Switching to narratives of Poland's "Ukrainian Quagmire" (1654-64) and Moscow's Turkish wars, Davies gives a sophisticated rationale for the near collapse of the commonwealth and shows that Peter the Great's capture of Azov owes less to his genius than to the long-term policy of limiting Tatar raids and building a modern army. Though lacking the elegance of William McNeill Europe's Steppe Frontier, 1500-1800 (CH, Feb'65), the narrative is straightforward and clear. Thought-provoking insights will doubtless spark debate in many a graduate seminar. Summing Up: Highly recommended. Graduate students, faculty. W. L. Urban Monmouth College (IL)

Briannbsp;L.nbsp;Davies is Associate Professor of History at the University of Texas at San Antonio. His publications include State Power and Community in Early Modern Russia: The Case of Kozlov, 1635-1649 (2004).