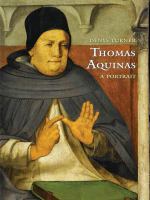 A Dominican -- A materialist -- The soul -- God -- Friendship and grace -- Grace, desire, and prayer -- Christ -- The Eucharist and eschatology -- Epilogue. the secret of Saint Thomas.

Creating a biography of the 13th-century Dominican theologian Thomas Aquinas is a difficult undertaking since relatively little personal information remains on the influential thinker. In response, Turner (historical theology, Yale; Julian of Norwich, Theologian) eschews a traditional biographical approach and attempts to develop a "portrait" or "caricature" of the saint's mind by analyzing his thoughts on various theological and philosophical topics including the soul, God, Christ, friendship, and grace. As the author makes an effort to tease out Thomas's personality from his writings, he observes that it is a mistake to try separately to understand his thought, spirituality, and sanctity; rather, these are all intrinsically intertwined. VERDICT Turner targets a nonspecialist audience; in this he is only partially successful. The complex theological arguments will be difficult to follow for those with no background in theology. Additionally, presenting those arguments necessarily requires digressions to explain opposing points, which tend to distract from the portrait of Saint Thomas. Finally, the lack of chronological framework makes the whole book less valuable for understanding Thomas's life. Ultimately, this work is best suited for those interested in medieval philosophy and thought or the history of philosophy.-Fred Poling, Long Beach City Coll. Lib., CA (c) Copyright 2013. Library Journals LLC, a wholly owned subsidiary of Media Source, Inc. No redistribution permitted.

Turner (Yale) constructs a rich thematic portrait of Thomas Aquinas's theology that takes up both standard Thomistic topics (the existence of God, the soul, grace, the person of Christ, the Eucharist) and some not so familiar (Thomas's materialism, and the role of friendship in his theology). In an engaging style, Turner builds an explanation, at times narrative and at times analytic, of how Thomas came to these views. He contrasts these views with those of Thomas's fellow Dominicans, his contemporary opponents, and prior philosophers and theologians. The core strength of this volume is its illustration of the implications of Thomas's theology for broader issues of faith and practice--particularly, but not exclusively, in the Catholic tradition. Readers who lack an extensive background in Thomas's writings will grasp the essentials of the arguments; at the same time, the volume as a whole has significant scholarly import for those interested in philosophy of religion or historical theology. Summing Up: Recommended. Upper-division undergraduates through researchers/faculty. J. C. Swindal Duquesne University