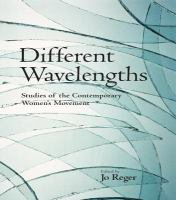 First Published in 2005. Routledge is an imprint of Taylor & Francis, an informa company.

Jo Reger is Assistant Professor of Sociology at Oakland University in Rochester, Michigan.