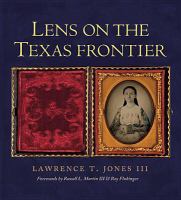 Lens on the Texas Frontier.

Photographs of Texas' frontier past are valuable as both art and artifact. Recording not only the lives and surroundings of days gone by, but also the artistry of those who captured the people and their times on camera, the rare images in Lens on the Texas Frontier offer a documentary record that is usually available to only a few dedicated collectors.In this book, prominent collector Lawrence T. Jones III showcases some of the most interesting and historically important glimpses of Texas history included among the five thousand photographs in the collection that bears his name at the DeGolyer Library of Southern Methodist University. One of the nation's most comprehensive and valuable Texas-related photography collections, the Lawrence T. Jones III Collection documents all aspects of Texas photography from the years 1846-1945, including rare examples of the various techniques practiced from its earliest days in the state: daguerreotypes, ambrotypes, tintypes, and paper print photographs in various formats.The selections in the book feature cartes de visite, cabinet cards, oversized photographs, stereographs, and more. The subjects of the photos include Confederate and Union soldiers and officers in the Civil War; Mexicans, including ranking military officials from the Mexican Revolution; and a wide spectrum of Texan citizens, including African American, Native American, Hispanic, and Caucasian women, men, and children.