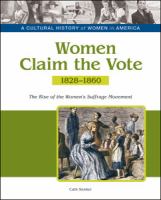 In the 19th century, the duality of the role of women in society became increasingly obvious. Women became more active in the public sphere, while the "cult of true womanhood" tried to restore her to her traditional domestic sphere. Early feminists active in the abolition movement increasingly began to compare women''s situation with the plight of African-American slaves. Women Claim the Vote explores the development and growth of these viewpoints in the decades leading up to the Civil War.