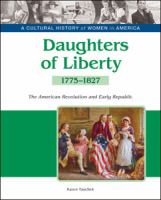 Daughters of Liberty : The American Revolution and Early Republic, 1775-1827

As the colonists became increasingly dissatisfied in the rule of the British government, women began to take an active role in the movements leading up to the Revolutionary War. After obtaining independence from the crown, women became dissatisfied with their exclusion from Constitutional rights. Daughters of Liberty traces women''s role through the war and the Early Republic, including the creation of the Daughters of Liberty, African-American mutual aid societies, and the first women''s relief organization, the Ladies Association of Philadelphia.

Gr 7 Up-These titles offer comprehensive, vivid, and thought-provoking looks at the struggles and triumphs of our Founding Mothers and the women who followed them in shaping our nation. Through succinct, informative text, each heavily illustrated volume incorporates the history of three major groups of people: the Natives, European settlers, and African slaves. Featured quotes from books, articles, letters, and speeches bring the history to life, and "Breakthrough Biography" and "Women of Courage and Conviction" sidebars introduce key historical figures. Readers new to the subject will find quick access to quality information, and history-savvy youngsters may find something new to ponder. Unbiased, engaging writing makes these books excellent additions to most collections.-Sara Saxton, Wasilla Meta-Rose Public Library, Wasilla, AK (c) Copyright 2011. Library Journals LLC, a wholly owned subsidiary of Media Source, Inc. No redistribution permitted.