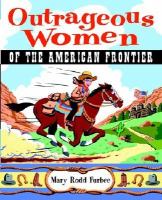 Outrageous Women of the American Frontier.

Incredible true stories of the most amazing women in American historyThey were courageous, resourceful pioneers, enduring and adventurous. They made arduous journeys, carved careers out of the wilderness, defied conventions, and fought for their freedom. They were community leaders, artists, and entrepreneurs. These Outrageous Women of the American Frontier boldly faced the gritty realities of daily life?everything from starvation to shootouts?and made their mark in history!Among the outrageous women you?ll meet are:* Charlie Parkhurst?who disguised herself as a man, drove a stagecoach for twenty years, and was probably the first American woman to vote* Bridget "Biddy" Mason?a former slave who gained her freedom in the 1850s and made enough money to set up several homes for the homeless, sick, and old* Gertrudis Barcelo?Santa Fe?s "Gambling Queen" who kept her maiden name, owned her own casino, and helped the United States win the Mexican-American War* Libbie Custer?wife of the famous general and a talented writer who chronicled her frontier adventures in books that made her a wealthy womanAlso available in the Outrageous Women series...* Outrageous Women of Ancient Times* Outrageous Women of Colonial America* Outrageous Women of the Middle Ages* Outrageous Women of the Renaissance

Mary Rodd Furbee is a part-time writing and journalism instructor at West Virginia University School of Journalism. She is the author of several children's books