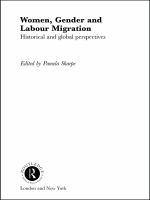 Approximately half of all migrants are today are female. The contributors to this volume consider the ways in which attention to gender is moving debates away from old theories that have long dominated the field of migration studies.