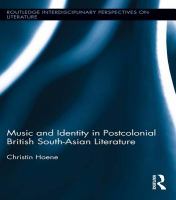 This book examines the role of music in British-South Asian postcolonial literature, asking how music relates to the construction of postcolonial identity. It focuses on novels that explore the postcolonial condition in India, Pakistan, and the United Kingdom: Vikram Seth''s A Suitable Boy, Amit Chaudhuri''s Afternoon Raag, Suhayl Saadi''s Psychoraag, Hanif Kureishi''s The Buddha of Suburbia and The Black Album, and Salman Rushdie''s The Ground Beneath Her Feet, with reference to other texts, such as E.M. Forster''s A Passage to India and Vikram Seth''s An Equal Music. The analyzed novels feat

Christin Hoene is Assistant Lecturer of English Literature at Humboldt University Berlin, Germany and the University of Potsdam, Germany.