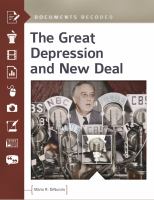 Presents documents illustrating the Great Depression crisis and the New Deal response that enables readers to witness the clash of conservatism and liberalism in a time of crisis Offers essays and notes that explain the documents-which include posters, articles, speeches, and court decisions-in the context of historical events Provides a timeline that creates a background setting for a documentary history Contrasts the ideas and actions of President Hoover against those of President Roosevelt