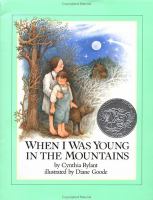 When I was young in the mountains / by Cynthia Rylant ; illustrated by Diane Goode.

Reminiscences of the pleasures of life in the mountains as a child.

K-Gr 3-Rylant delights in the simple joys of living with her grandparents in the Appalachian Mountains: fresh cornbread, the swimming hole, bathing in the tin tub, snakes, and the community church. Surrounding all of these memories is the loving relationship with her grandparents. Warmly rendered illustrations complement the lyrical text. Audio version available from Audible. (c) Copyright 2013. Library Journals LLC, a wholly owned subsidiary of Media Source, Inc. No redistribution permitted.

Rylant worked as an English professor and at the children's department of a public library, where she first discovered her love of children's literature.

She has written more than 100 children's books in English and Spanish, including works of fiction, nonfiction, and poetry. Her novel Missing May won the 1993 Newbery Medal and A Fine White Dust was a 1987 Newbery Honor book. Rylant wrote A Kindness, Soda Jerk, and A Couple of Kooks and Other Stories, which were named as Best Book for Young Adults. When I was Young in the Mountains and The Relatives Came won the Caldecott Award.

She has many popular picture books series, including Henry and Mudge, Mr. Putter and Tabby and High-Rise Private Eyes. (Bowker Author Biography)