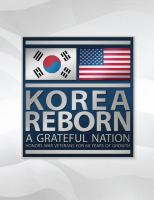 "This commemorative gift is published and produced with cooperation from the Republic of Korea and the United States of America."

"This limited edition commemorative book was published and produced by Remember My Service Productions, a division of StoryRock, Inc., in cooperation with Seoul Selection."

Prologue: The "forgotten victory" -- Setting the stage -- The war begins -- Standing strong in Busan -- The Incheon landings -- North to the Yalu -- MiG Alley and air power -- A brutal winter -- Battles over Seoul -- Battles of the Punchbowl -- The Iron Triangle -- The fighting ends -- Operation Glory -- From rubble to Powerhouse -- Envisioning a New Korea -- A global leader -- From aid recipient to donor -- The alliance forged in blood -- Defining foreign relations -- The Republic of Korea thanks you.

Preface by Park Geun-hye, President of the Republic of Korea.

A retrospective look at the Korean War and the years of prosperity that followed.