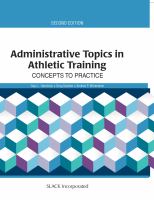 <p> Gary L. Harrelson, EdD, PCC, ATC , received his bachelor''s of science in athletic training, master''s of science in exercise physiology, and EdD in administration and teaching all from the University of Southern Mississippi. He is the Director of Organizational Development and Education (ODE) for the DCH Health System in Tuscaloosa, Alabama. Since his certification as an athletic trainer in 1985, Dr. Harrelson has worked as an athletic trainer in multiple settings, which include high school, clinic, collegiate, and professional sports. Dr. Harrelson has taught in the athletic training curriculums at the University of Alabama and the University of Southern Mississippi. He was an Associate Editor for the Journal of Athletic Training and Athletic Therapy Today . Additionally, he is the coauthor of the book, Physical Rehabilitation of the Injured Athlete now in its fourth edition, Principles of Pharmacology for Athletic Trainers (3rd edition), as well as a CD-ROM on Joint Mobilization and an 8-video series on evaluation. He has authored numerous articles and made many professional presentations at the state, regional, and national levels as well as internationally. As a result of his position within the DCH Health System he either directly or indirectly supports the training and development initiatives across multiple health care professions.</p> <p> Greg Gardner, EdD, ATC, LAT is a Clinical Professor of Athletic Training and Chairperson of the Department of Kinesiology and Rehabilitative Sciences at the University of Tulsa. He completed his bachelor''s degree at the University of Wyoming and holds a master''s degree from the University of Arizona. In 1995, he completed his doctoral work at the University of Southern Mississippi. Dr. Gardner has extensive experience as an athletic trainer and has been a certified athletic trainer for 30 years. His career includes work at the high school, small college, and major college level. He served on the JRC-AT and remained with that group as the transition to CAATE was completed. In November of 2008, Dr. Gardner was elected as the first President of the CAATE and served in that capacity until August 2012. Dr. Gardner is currently the US Vice President of the World Federation of Athletic Training and Therapy as well as the Vice President of the Oklahoma Athletic Trainers Association. He was named Most Distinguished Athletic Trainer by the National Athletic Trainers Association in 2010. He was also inducted into the Mid America Athletic Trainers Association Hall of Fame in 2013 and the Oklahoma Athletic Trainers Association Hall of Fame in 2014. Greg enjoys traveling, cooking barbecue, and is a certified barbecue judge. He lives in Tulsa, Oklahoma with his wife, Christi.</p> <p> Andrew P. Winterstein, PhD, ATC is a clinical professor in the Department of Kinesiology at the University of Wisconsin-Madison, where he currently serves as the program director of the athletic training professional preparation program. A graduate of the University of Arizona, University of Oregon, and the University of Wisconsin-Madison; Dr. Winterstein has been active in athletic training patient care and educational programming at the University of Wisconsin-Madison since 1986.</p> <p>Dr. Winterstein''s academic interests include: emerging technologies and their use in teaching and learning, medical humanities and their application to athletic training education, organizational dynamics, educational interventions/behavioral change, and patient-reported outcome measures following injury. His papers and abstracts have appeared a variety athletic training and sports medicine journals and he has been privileged to make numerous professional presentations at state, regional, national, and international conferences.</p> <p>In addition to this text he is the author of Athletic Training Student Primer: A Foundation for Success, Second Edition (SLACK Incorporated) and coauthor with Sharon Clark of The Athletic Trainer''s Guide to Differential Diagnosis: A Visual Learning Approach (SLACK Incorporated).</p> <p>Dr. Winterstein has received numerous awards, including the 2016 NATA Most Distinguished Athletic Trainer Award, 2008 Great Lakes Athletic Training Association Outstanding Educator Award, 2007 Wisconsin Athletic Trainers'' Association Outstanding Educator Award, and the 2006 University of Wisconsin-Madison School of Education Distinguished Service Award. He and his colleagues are three-time winners of the NATA Educational Multimedia Committee award for educational innovations and have been awarded the MERLOT Classics Award for exemplary on-line learning objects.</p> <p>Dr. Winterstein enjoys fly fishing, standup paddling, watch collecting, reading, and writing. He resides in Madison, Wisconsin with his wife, Barb.</p>