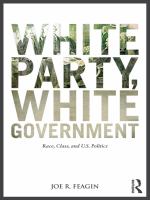 White Party, White Government examines the centuries-old impact of systemic racism on the U.S. political system. The text assesses the development by elite and other whites of a racialized capitalistic system, grounded early in slavery and land theft, and its intertwining with a distinctive political system whose fundamentals were laid down in the founding decades. From these years through the Civil War and Reconstruction, to the 1920s, the 1930s Roosevelt era, the 1960s Johnson era, through to the Ronald Reagan, George H.W. Bush, and Barack Obama presidencies, Feagin exploring the effects of ongoing demographic changes on the present and future of the U.S. political system.

Description based on publisher supplied metadata and other sources.

Feagin (sociology, Univ. of Florida), author of several books about racism in the US, argues that many white Americans see politics through a frame of white racial privilege. He illustrates his thesis with a review of political history since the Puritans and ends with two chapters on Barack Obama's 2008 campaign, subsequent presidency, and a discussion of the impact of demographic change. Feagin sometimes slips from referring to the "the white male elite" as the privileged group in society to white males in general; it would help if he were more precise on this; and the book is more an exposition of his approach than an argument for why that approach is correct. Still, this book is an excellent reference for other scholars, thanks to Feagin's very thorough research and documentation. Those wishing more nuance might prefer Still a House Divided, by Desmond King and Rogers Smith (CH, May'12, 49-5348). Summing Up: Recommended. General readers, upper-division undergraduate students, graduate students, and research faculty. J. C. Berg Suffolk University

<p>Joe R. Feagin is Ella C. McFadden Professor at Texas A&M University. He has done research on racism and sexism issues for forty-six years and has served as the Scholar-in-Residence at the U.S. Commission on Civil Rights. He has written 58 scholarly books and nearly 200 scholarly articles in his research areas, and one of his books (Ghetto Revolts) was nominated for a Pulitzer Prize. His recent books include Systemic Racism (Routledge 2006), The White Racial Frame (Routledge 2010), and Racist America (2nd edition, Routledge 2010). He is the 2006 recipient of a Harvard alumni association lifetime achievement award and was the 1999-2000 president of the American Sociological Association.</p>